Asbestos, a Quebec Mining Town, Will Change Name to Val-des-Sources 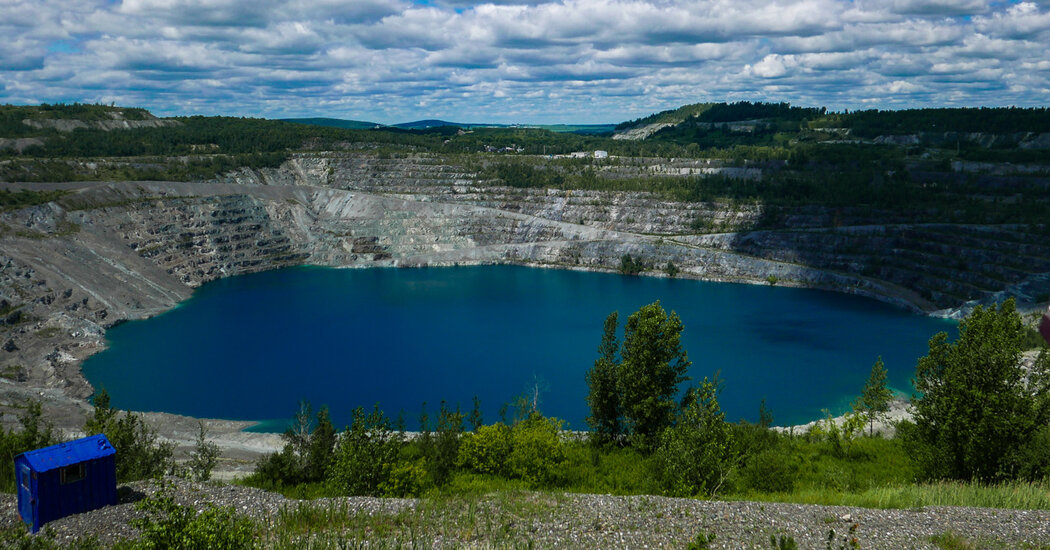 Asbestos, a Quebec town that is home to what was once the largest asbestos mine in the world, no longer wants to be named after the carcinogen.

For two centuries, the town’s economic and cultural identity had been tied to the mineral. Blue water now fills the Jeffrey Mine, where workers mined tons of chrysotile asbestos, providing crucial material for fire insulation, including equipment for soldiers of two world wars.

But the association with the mine slowly turned into a burden for the town, as the mineral’s links to cancer became widely known. On Monday, the mayor of Asbestos announced that residents had voted to call the town Val-des-Sources, which translates as “Valley of the Springs.”

The town, about 100 miles east of Montreal, is home to 7,000 residents, some of whom have sought to distance themselves from the cancer-causing material that formed the backbone of the local economy and identity.

On Monday evening, after lengthy debates, committee meetings, discussions and days of residents’ voting from their cars because of the coronavirus pandemic, the mayor unveiled the people’s choice.

If all goes as expected, the town will be rid of the carcinogenic reference by December, the mayor said. The new name still needs the approval of the provincial government and the minister of municipal affairs and housing.

“I know that changing the name is a very emotional subject — for us, too — since the beginning,” Hugues Grimard, the town’s mayor, said on Monday, deeming the decision “historic.”

“But to have all the citizens who came out to vote, that tells me that we succeeded in winning over the population,” he said, “and that makes me very proud.”

After the town council approved a name-change plan, a choice of six names was put before voters. All residents above the age of 14 were eligible, according to a spokeswoman for the town. Nearly half of the eligible voting population — around 3,000 residents — participated. After three rounds of voting, Val-des-Sources emerged as the winning name, with 51 percent of the votes.

In 2006, six years before the mine shut down, town officials proposed the idea of a name change but ultimately failed to gain necessary support. A second push for a name change succeeded last November, and the mayor sent out a call for suggestions.

“The word ‘asbestos’ unfortunately doesn’t have a good connotation, especially for Anglophones, and it’s hindering the city’s plans to develop external economic relations,” the city said in a news release at the time.

The six proposed names on the ballot, whittled down from 1,000 submissions, included options like Trois-Lacs (Three Lakes) and L’Azur-des-Cantons (Azure of the Townships) — a reference to the blue water that now fills the mine — that gestured to the natural beauty of the area.

Asbestos — the commercial name used to describe different fibrous minerals that until the 1970s were used around the world in insulation, roof tiles, fire-resistant clothing and many other products — was not one of the options.

The new name, Val-des-Sources, is a homage to the natural landscape that surrounds the town: the Nicolet River that flows into Lake Trois-Lacs, three interconnected lakes, and the hilly horizon, the mayor said.

Asbestos the town has a deep and complex history with asbestos the mineral, said Jessica Van Horssen, a professor at Leeds Beckett University and author of “A Town Called Asbestos.”

The town was originally named after a group of miners who discovered what they initially thought was a small asbestos deposit in a farmer’s field but eventually became the largest asbestos mine in the world, Professor Van Horssen said.

When business was good, children in town could write their names in asbestos dust that floated down from the mines, and the dust would coat laundry drying on lines outside. During World Wars I and II, miners in Asbestos provided material for ships, aircraft and fireproof soldier’s uniforms, she said.

“They were heroes, and took a lot of pride in their work and community because of that,” she said. Many historians agree that a lengthy, violent labor strike at the mine in 1949 was the beginning of broad political, economic and social changes in Quebec that became known as the Quiet Revolution.

The Jeffrey Mine officially shut down in 2012, many years after scientists deemed asbestos dangerous and cancer-causing. According to the World Health Organization, all forms of asbestos, including chrysotile, are carcinogenic. Exposure can cause cancer of the lungs, larynx and ovaries, as well as mesothelioma and other diseases.

Though many countries have taken steps to ban its use or production, including Canada in 2018, the World Health Organization estimated in 2005 that about 125 million people worldwide were exposed to asbestos at work.

Some residents of the town, particularly older inhabitants, vehemently fought the change, as some French Canadians don’t necessarily associate “Asbestos” with the deadly mineral because the French word for asbestos is “amiante.”

“Us older people are all in favor of the name Asbestos,” André Thibodeau, a 76-year-old lifelong Asbestos resident, told CBC News while casting his vote. “You don’t change names for nothing!”

Young people and small-business owners — it can be difficult to sell products labeled with “asbestos” — were among those who pushed hardest for the change, Professor Van Horssen said. She said she hoped that the name change reflected hope for the future of the town.

“The community has been through incredible changes in its history, from having to move their homes every few years so the mine could expand to having their world completely change when they were finally told what the mineral was doing to their bodies,” she said. “They’ll survive this, and hopefully begin a new era that’s not reliant on a toxic industry.”