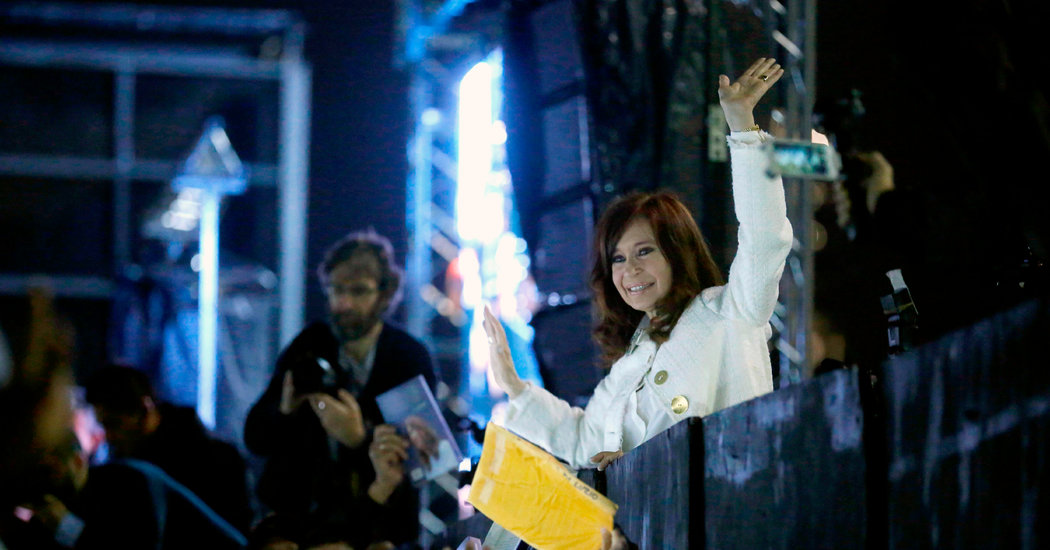 Days before she is set to go on trial on corruption charges, Cristina Fernández de Kirchner announced on Saturday that she intends to return to the presidential palace this year, this time as vice president running alongside Alberto Fernández, a former ally with whom she has had an uneasy relationship.

The announcement by Mrs. Kirchner, who governed Argentina from 2007 to 2015 and is currently a senator, stunned Argentine political observers who had widely expected the leftist leader to mount a bid for a third presidential term.

Mr. Fernández served as cabinet chief to Mrs. Kirchner’s husband, Néstor, who took office after a record-breaking default in 2001 left the economy in collapse and who governed during a period of relative prosperity fueled by a commodities boom.

He remained in the role when Mrs. Kirchner succeeded her husband, but stepped down a few months later after a battle between the government and farmers over export taxes.

Mrs. Kirchner, 66, said in her announcement that if she and Mr. Fernández win in October, they will take the reins of a profoundly distressed economy, calling the conditions worse than in 2001, when Argentina defaulted on nearly $100 billion in debt.

Mrs. Kirchner was ineligible to run for a consecutive third term in 2015, when her party lost the presidency to Mauricio Macri, a center-right leader who promised fundamental changes.

He and his allies accused the Kirchners — Néstor died in 2010 — of having run the country like a criminal enterprise and of distorting the economy by offering politically advantageous subsidies that were unaffordable once the commodities boom had ended.

But Mr. Macri’s efforts to rein in spending have made him deeply unpopular amid soaring inflation, rising unemployment and poverty.

When the country plunged into recession last year, Mr. Macri turned to the International Monetary Fund to obtain a $57 billion rescue, a politically risky move considering that many Argentines blame the I.M.F. for the economic collapse of 2001.

Mrs. Kirchner criticized that decision in a video announcing her candidacy, calling the new debt “terrifying and unnecessary.”

Mrs. Kirchner was expected to mount a direct challenge to Mr. Macri, who hopes to be re-elected. A week ago, she released a memoir titled “Sincerely” during a packed event that looked more like a political rally than a book launch.

While opinion polls show that roughly a third of the electorate support Mrs. Kirchner, she brings considerable baggage to the race. She has been indicted in 11 cases, which she has dismissed as a political witch hunt. She is scheduled to go on trial on Tuesday in a case involving corruption in public works contracts.

Responding to her announcement, Mr. Macri said at an event in Buenos Aires that returning to the past “would only destroy us” and he argued that it is necessary to continue “yanking the rotten roots.”

Some political analysts, while shocked by Mrs. Kirchner’s decision, said it made sense to run a less polarizing figure at the top of a ticket that could still benefit from Mrs. Kirchner’s considerable popularity.

Mr. Fernández — who is not related to the former president — is regarded as a more moderate and conciliatory figure than Mrs. Kirchner within the Peronist political movement.

“No one, no one thought this was a possibility,” said Luis Tonelli, a professor of comparative politics at the University of Buenos Aires. “This is a very strong play because until now the division was the main driving force in Argentine politics.”

Mr. Fernández has not been implicated in corruption schemes, unlike many senior figures who served in Mrs. Kirchner’s government. He was critical of Mrs. Kirchner’s leadership as president, accusing her of mismanaging the economy and calling her meddling in judicial matters “deplorable.”

It’s unclear whether voters will see Mr. Fernández as the actual head of the ticket or as a figurehead in the weeks ahead. Notably, he did not release an announcement or video of his own alongside Mrs. Kirchner’s.

Mariel Fornoni, a political analyst who runs Management and Fit, a polling firm, said Mr. Fernández had been rumored as a possible running mate for Mrs. Kirchner, but never as a presidential candidate.

“The fact that it is the other way round shows an effort to capture the more moderate voter who is not satisfied with what the government is doing but couldn’t quite bring themselves to vote for Cristina,” she said.