Mexico Cracks Down on Migrants, After Pressure From Trump to Act

TAPACHULA, Mexico — They arrived at dusk, dressed for combat, pouring from government vehicles. A phalanx of military and police personnel swarmed a small hotel in the center of Tapachula, this scrappy city near Mexico’s border with Guatemala. Their target: undocumented migrants.

Agents rushed door to door, hauling people away, while migrants shouted or ran out the back, scampering over the rooftops of neighboring homes, witnesses said.

It was one of several raids here last week to sweep up migrants, part of a broad Mexican crackdown against the surge of Central Americans and others streaming toward the United States. In recent weeks, the Mexican authorities have been breaking up migrant caravans and setting up round-the-clock roadblocks along common routes north.

Detentions and deportations in Mexico are multiplying quickly, sowing fear among the many thousands of Central Americans and others crowding the migrant shelters and budget hotels here in southern Mexico, most of them hoping to reach the American border.

“So scary,” said one Cuban migrant at the hotel. “The fear never goes away.”

The Mexican government has been under intense pressure from President Trump to block the tens of thousands of undocumented migrants trudging north each month. With the American authorities unable to stop illegal immigration into the United States, Mr. Trump has taken aim at countries in the region — including Guatemala, Honduras and El Salvador, the origins of most of the migration — threatening punishment unless they to do more.

Last week, Mr. Trump stunned officials and business leaders on both sides of the American border by promising tariffs on all Mexican imports unless Mexico stopped undocumented migrants from crossing into the United States.

“Tariffs could cause financial and economic instability,” weakening the Mexican government’s ability to solve the problem, Mr. Ebrard said. He and other officials are holding talks with the Trump administration this week to defuse the situation, but they warned that Mexico could respond with retaliatory measures of its own.

President Andrés Manuel López Obrador of Mexico insists that his country has been doing its part already, arguing that the crisis stems from a complex array of social and political problems across the region that would take billions in international investment — not punitive measures — to fix.

But their recent enforcement efforts aside, Mexican officials admit that their southern border is highly porous, with thousands of migrants slipping across every month through hundreds of known illegal crossings.

Along the Suchiate River, which marks part of the border between Mexico and Guatemala, scores of rafts cross within view of an official border bridge. Made of wooden planks lashed to tire inner tubes, they float back and forth throughout the day, openly carrying undocumented migrants, local residents and black-market goods.

According to the raftsmen, the recent crackdown by the Mexican authorities has not affected their illegal traffic. Marvin Garcia, a veteran raftsman, said that at just the crossing he works, more than 150 undocumented migrants had crossed during a recent two-day period.

As for the Mexican border patrol and other security forces, “they spin through from time to time, nothing more,” he said, adding, “They don’t do anything.”

Despite the pressure from Mr. Trump, Mexican officials have insisted that they will not “militarize” their southern border by building a border wall or saturating it with security forces.

Analysts say Mexico doesn’t have the resources to harden its 700-mile-long border with its Central American neighbors, especially since the nation is already stretched thin dealing with record levels of violence throughout the country.

And even if the Mexican government tried to fortify its southern border, analysts contend, it would probably not be enough to stop the unremitting surge.

In April, more than 109,000 people were apprehended at or near the southwest border of the United States, the highest monthly total since 2007. Many were traveling in families, which have continued to arrive in historic numbers despite Mr. Trump’s various efforts to stop the flow.

The mass migration was underway when Mexico’s president, Mr. López Obrador, took office on Dec. 1. But as a populist and lifelong champion of the poor, he campaigned on a platform of protecting migrants’ human rights, vowing to reject what he called the heavy-handed, enforcement-first approach of his predecessors. 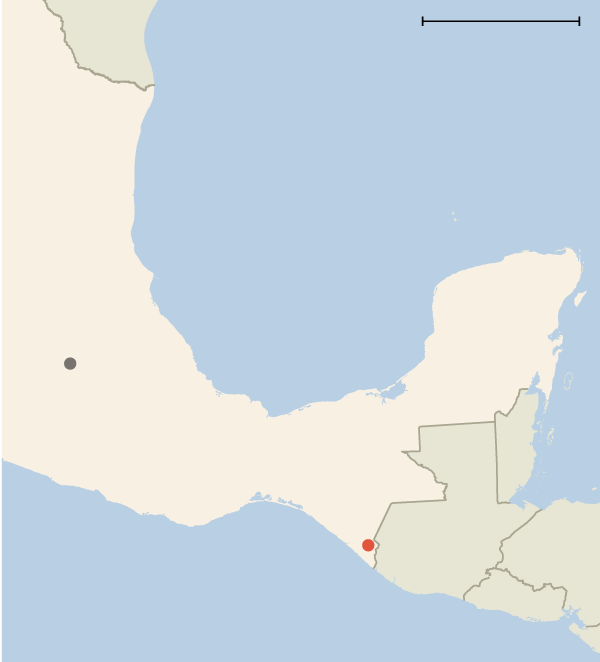 At first, his administration opened its arms to migrants, broadcasting abundant work opportunities in Mexico and starting a program that gave expedited, yearlong humanitarian visas to just about everyone who applied. Officials also let the large and frequent migrant caravans entering from Central America to move relatively unimpeded across Mexican territory.

In the first four months of his administration, deportations fell 38 percent compared with the last four months of his predecessor’s term. But the permissiveness encouraged more migration from Central America, with many seeking to use Mexico as a thruway to the United States.

In late March, Mr. Trump threatened to close the border with Mexico to thwart migration. He also moved to cut off aid to the Central American countries sending most of the migrants to the United States.

In April, nearly 15,000 migrants were deported by Mexico, up from about 9,100 in March, according to government statistics. The monthly tally climbed even higher in May. Over the last two months, the López Obrador administration deported 67 percent more migrants than its predecessor did during the same period in 2018.

“The López Obrador administration clearly wants to create a different approach to managing migration that treats migrants more humanely,” said Andrew Selee, president of the Migration Policy Institute in Washington. “But faced by the exponential growth in the flow and the pressure from the Trump administration to stop it, they have mostly fallen back on an enforcement-only approach, like previous Mexican administrations.”

The Mexican government has not entirely abandoned its efforts to accommodate migrants and absorb them into the nation’s fabric. It has sought to expand eligibility for work and visitor visas for Central Americans. And some migrants’ advocates say it has done a better job than past administrations of promoting its asylum program, which is on track to receive about 60,000 applications this year, about double the number last year.

Many thousands of migrants, often as a last resort to avoid deportation, have applied for visas or asylum in Mexico. But the rush has overwhelmed the government’s migration agencies, which are crumpling under the weight of severe backlogs and budget cuts. Despite the relentless increase in migration in recent months, the division that handles enforcement, the National Migration Institute, suffered a 23 percent reduction in its budget this year.

The delays are evident here in Tapachula, the main city in this part of Mexico and a major way station for migrants en route from Central America to the north.

Thousands of migrants fill the city’s shelters and budget hotels, or crowd cheap rooming houses, waiting months for a resolution to their applications.

Karina Orellana, 24, her partner, Jorge Alberto Martínez, 43, and Mr. Martínez’s nephew, David Martínez, 25, arrived here from El Salvador a week ago expecting to be received with open arms by the Mexican government. They planned to apply for refuge in Mexico and relocate to the northern state of Nuevo León, where they heard there were jobs.

They were not expecting the enforcement crackdown or the long bureaucratic delays. Mexican officials told them their asylum petitions could take at least five months to process.

“The news says one thing and the reality is different,” said Ms. Orellana, who was staying with companions at the Jesús El Buen Pastor del Pobre y Migrante shelter, where nearly 600 people are crammed into a space fit for about 250.

The long waits have driven some migrants to give up and hit the northbound trail again.

“Many are asking, ‘When does the train pass?’” said Rosibel López Gómez, the manager of the Jesús El Buen Pastor shelter, referring to the cargo train known as The Beast, which many migrants board illegally to cross Mexico.

Some have resorted to contracting smugglers. In fact, the Mexican crackdown and Mr. Trump’s efforts to restrict immigration have benefited the migrant-smuggling industry and the corrupt Mexican officials who abet it, analysts say.

Mr. López Obrador and officials in his delegation to Washington say they are optimistic about reaching a deal with the Trump administration. The Mexican president suggested over the weekend that he was willing to “reinforce” the government’s migration-control strategies — as long as human rights were not violated.

But on Monday, Mexico’s ambassador to the United States, Martha Bárcena, said there was a limit to the Mexicans’ flexibility in the negotiations. “And the limit is Mexican dignity,” she said.

Mr. López Obrador has for months been pushing a strategy to address the migration crisis by attacking the root problems that are compelling people to leave their homelands.

Supporters of the approach hope the United States will become a major donor and participant. But Mr. Trump has instead moved to cut aid to the three Central American countries that send most of the migrants trying to cross the United States’ southwest border.

Last week, the Trump administration signed a two-year agreement to deploy up to 80 agents from the Department of Homeland Security to Guatemala to help train its law enforcement officials and conduct investigations aimed at stemming illegal migration.

But analysts wonder whether the American offer will extend much further.

“López Obrador is right that the only long-term solution for stopping out-migration from Central America is to invest in security and prosperity in the countries of origin,” Mr. Selee said. “But it’s unclear whether his government will put serious resources into this, and even less clear if the Trump administration will help.”