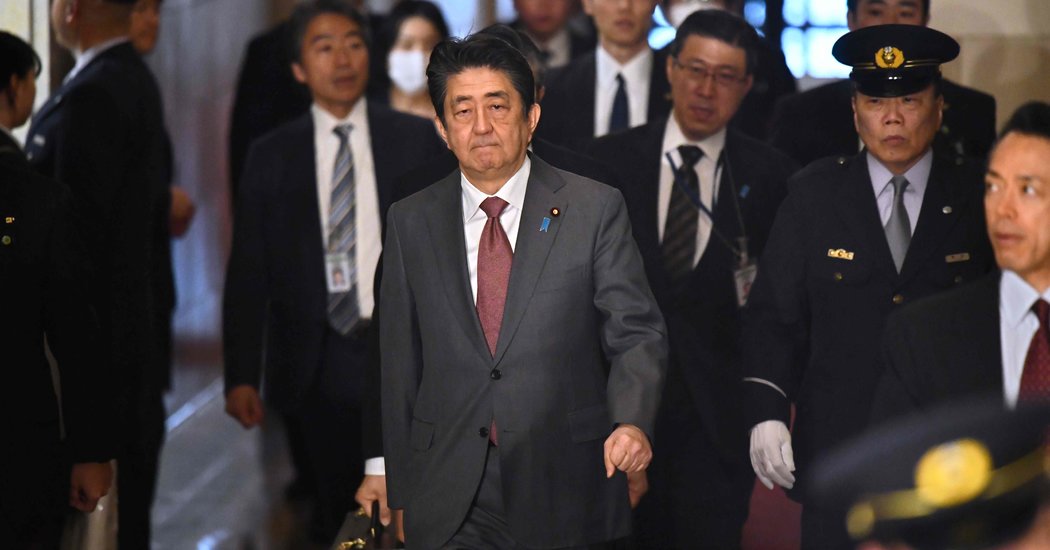 TOKYO — For nearly a month, as the coronavirus has threatened the health and economy of Japan, Prime Minister Shinzo Abe has been almost invisible.

Public health officials, not Mr. Abe, became the face of government ineptitude when a troubled quarantine of a cruise ship led to hundreds of infections on board and the risk of further cases on shore. Those officials have also been left to explain why the government’s testing for the virus has been stuck at around 900 patients a day, even as neighboring countries test up to 10,000.

In the past week, a backlash from an angry and confused public has finally forced Mr. Abe to take more of a front-line role, but his clumsy efforts have only succeeded in deepening the biggest political crisis of his more than seven years in office — the longest tenure of any Japanese prime minister.

Mr. Abe’s approval ratings have plummeted to the upper 30s in some polls. Last weekend, after he held his first news conference on the crisis — a scripted affair with prearranged questions that left Japanese journalists shouting at him for answers — Twitter was flooded with over a million posts demanding his resignation. Two days before, after weeks of inaction, he had blindsided parents by asking the nation’s schools to close for a month, sending many scrambling to find child care.

All the while, cases of the virus have continued to climb, even as screening has remained constricted, leaving many fearful that a large number of infections are going undetected. Japan recorded its biggest daily increase on Wednesday — 33 — and confirmed a further 14 cases on Thursday, bringing the total to more than 300, not including the nearly 700 cases from the cruise ship Diamond Princess. Twelve people in all have died.

Yoichi Masuzoe, who once served Mr. Abe as health minister and headed Japan’s fight against the 2009 swine flu pandemic, which killed dozens in the country, said the government’s handling of the outbreak had been “so disastrous” because Mr. Abe “has stayed too long in power.”

Mr. Abe’s chokehold on authority has stifled dissent among officials, exacerbated the government’s tendency to hoard information and made the bureaucracy complacent, Mr. Masuzoe said. “Openness is very important in the fight against the virus,” he noted. “All of the ministers are under the control of Mr. Abe. They cannot say a word against him.”

“This is a structural problem of the Abe administration,” he added.

The coronavirus has presented a serious test for many world leaders, including President Trump, who is trying to repel criticism of his government’s initial response as he faces a re-election campaign.

For Mr. Abe, though, the very consolidation of power that seems to have hampered the official reaction to the virus may ultimately keep him firmly in place, no matter how much the public sours on him. Japan’s political opposition has fallen into disarray and its news media has grown ever more deferential, leaving a widespread feeling in the country that there is no alternative to the sitting prime minister.

“There just isn’t anyone to direct the government in the way that he has,” said Brad Glosserman, an expert on Japanese politics at the Center for Rule-Making Strategies at Tama University in Tokyo.

“There is no credible alternative in the opposition at this point, so the Japanese people are sticking with the devil they know,” Mr. Glosserman added, noting that the situation had created “a feeling that democracy is not really working.”

The coronavirus has endangered not just public health, but also major aspects of Mr. Abe’s legacy projects. Japan’s economy, which he had led out of nearly two decades in the doldrums, is on the brink of recession. China’s leader, Xi Jinping, on Thursday postponed a highly anticipated visit, the first by the country’s Communist Party chief in over a decade. And talk of calling off the Summer Olympics in Tokyo grows by the day.

Mr. Abe has skated past several political scandals that would have wiped out most other politicians in Japan, where even seemingly insignificant improprieties, like giving potatoes to constituents, can end in resignation.

Over the past year alone, a pair of cabinet ministers have resigned, Mr. Abe’s government has been accused of destroying records related to the possible misallocation of public funds, at least two members of his party have been linked to bribes from a Chinese gambling company, and prosecutors raided the offices of a close political ally over allegations that she violated campaign finance law.

Through it all, the public hardly batted an eye. Mr. Abe has long enjoyed the benefit of the doubt among Japanese voters, who in 2012 put him in office for a second time after a short, undistinguished stint starting in 2006.

His most recent rise to the prime minister’s office followed a period of instability in the country’s leadership that sapped the national appetite for politics. He was the seventh prime minister in seven years, and at the time of his elevation, just a year after what was seen as a bungled government response to the Fukushima disaster, he was widely considered the best of a bunch of bad options.

But he surpassed expectations, managing to lead the economy into a period of modest and relatively steady expansion, presiding over a winning Olympic bid, and skilfully finessing mercurial relationships with both Mr. Xi and Mr. Trump.

His handling of the coronavirus, however, has rapidly drained the reservoir of good will he had built up over seven years in office.

Unlike his past scandals, the virus response “affects the health of all the people,” said Mieko Nakabayashi, a professor at Waseda University in Tokyo and a former member of the Japanese Parliament for a rival party. “It is something that is related to each individual.”

“These kinds of mistakes make people question his priorities, whether he’s mature or a strong leader,” she added.

The problems began in January, when the government appeared slow to react to the explosion of coronavirus cases in neighboring China, just as Japan expected a flood of tourists from the country.

The situation quickly worsened in early February, when the government mismanaged the quarantine of the Diamond Princess, allowing the virus to circulate among the more than 3,700 crew members and passengers who were waiting out a two-week isolation period in the port city of Yokohama.

On shore, the government seemed incapable of keeping up with the growing demand for coronavirus tests. While other countries in the region quickly ramped up their diagnostic capacity, Japan has struggled to conduct the examinations.

Even as the problems mounted, though, Mr. Abe seemed uninterested. He made only brief appearances at strategy meetings, and spent his evenings wining and dining friends and cabinet ministers, appearing at parties even as the government called on people to avoid public gatherings.

That apparent complacency made his decision a week ago to call for closing the country’s schools seem all the more shocking. Japanese politicians and parents questioned its scientific basis and demanded to know how they were expected to both work and care for their children.

Mr. Abe has also drawn some alarm by pushing for a law that would grant him emergency powers to deal with the virus.

Within his own party, however, few feel safe speaking out against him, even in his weakened state, said Amy Catalinac, an assistant professor of politics at New York University.

“Abe has to an extraordinary degree made it difficult to mount criticism of him within the party,” she said, adding, “I don’t even know how low his support rating would have to go before the party would desert him.”

That is a crucial question as Mr. Abe considers his political future.

He has remained silent about his plans after the end of his current term as president of the governing Liberal Democratic Party, which runs through September 2021. There has been speculation that he could try to wrangle a precedent-shattering fourth term, potentially extending his time as prime minister another three years.

Alternatively, he could anoint a successor, allowing him to continue to exercise some degree of control from behind the scenes.

Now, however, most experts agree that both possibilities are much less likely. Mr. Abe could even be forced to resign if the Olympics are canceled or Japan’s economy craters.

The question is what would come next, said Gerald L. Curtis, a professor emeritus of political science at Columbia University.

“The opposition parties are in too hopeless a state to take advantage of the situation, and none of the ruling party’s leaders who would like to succeed Abe want to come to power in the middle of this unprecedented crisis,” he said.

One thing, he added, is for sure: Mr. Abe’s successor “will face a skeptical, distrusting public.”