Trump Administration to Block Chinese Airlines From Flying to the U.S. 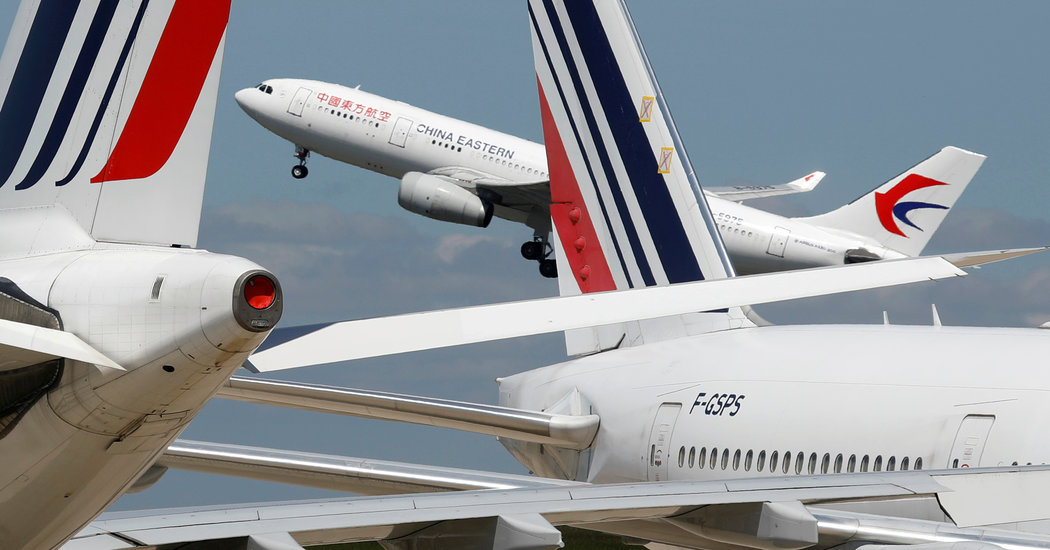 The Trump administration said on Wednesday that it would block Chinese passenger airlines from flying into or out of the United States starting on June 16 in retaliation for a similar ban by the Chinese government on American companies, further escalating tensions between the world’s two biggest economies.

Relations between the countries have deteriorated sharply in recent weeks as officials scuffled over the origin of the pandemic and China’s move to tighten its authority over Hong Kong, a semiautonomous city. With the election just five months away, President Trump and his campaign have taken a much tougher stand against China, blaming its government for allowing coronavirus to turn into a pandemic and wreck the American economy.

The aviation dispute threatens to further chill economic relations and disrupt business ties between the United States and China. Flights between the countries were already sharply curtailed by the pandemic and Chinese restrictions on foreign airlines that effectively halted trips by United Airlines, Delta Air Lines and American Airlines, the major U.S. carriers that go there.

China’s aviation regulators said on March 26 that they would limit foreign carriers to one flight per week based on schedules that were in place earlier that month. But those three airlines had already stopped service to the country by then because of the coronavirus. Chinese airlines continued to fly to American cities.

The Chinese restrictions became a problem only in recent weeks, as Delta and United sought to resume flights to China in June. Both carriers appealed to the Civil Aviation Authority of China, but did not receive a response. U.S. Transportation Department officials also pressed Chinese officials to change their position during a call on May 14, arguing that China was in violation of a 40-year-old agreement that governs flights between the two countries and calls for rules that “equally apply to all domestic and foreign carriers” in both countries.

China’s aviation authority told American officials that it was considering amending its rule, but it has not said “definitively” when that might happen, the Transportation Department said in the filing on Wednesday announcing its decision to suspend flights. “In light of these facts, which present a situation in which the Chinese aviation authorities have authorized no U.S. carrier scheduled passenger operations between the United States and China, we conclude that these circumstances require the department’s action to restore a competitive balance.”

Delta said in a statement that it still hoped to restart flights to China as soon as next week, pending approval, and that the airline appreciated the federal government’s intervention. United said it would fly to China “when the regulatory environment allows us to do so.”

In mid-May, the Trump administration expanded restrictions on Huawei, the Chinese telecom firm, and blocked a U.S. government pension fund from investing in China. On May 22, it added more than 30 Chinese companies and institutions to a blacklist that restricts their access to American technology.

Last Friday, Mr. Trump also said that he would end some aspects of the American government’s special relationship with Hong Kong, which is exempt from the new aviation order, and that his administration would place sanctions on officials responsible for Beijing’s rollback of liberties in the territory.

Chinese officials have tried to walk a narrow line between maintaining the country’s own tough stance on the Trump administration and preserving its economic relationship with the United States. The Chinese government has threatened to respond with its own measures, including placing U.S. companies on an “unreliable entity list” that could restrict their activities in China.

As ground zero of the pandemic, China was the first country to see aviation grind to a halt this year. In January, American and Chinese carriers operated about 325 weekly flights between the two countries, according to the Transportation Department. By mid-Feburary, only 20 remained, all of them run by Chinese airlines.

In March, that slowdown spread worldwide, bringing air travel to a screeching halt and devastating the global aviation industry. By April, demand for flights worldwide had fallen by more than 94 percent, compared with a year ago, according to the International Air Transport Association.

But there have been signs in recent weeks that demand is recovering. The number of daily flights rose from late April to late May, countries are beginning to lift travel bans and business confidence is slowly recovering in key markets, including China, the United States and Germany, Alexandre de Juniac, IATA’s chief executive, said in a statement on Wednesday.

“The initial green shoots will take time — possibly years — to mature,” he said.

To accelerate that recovery, airlines are taking a wide range of measures aimed at addressing health concerns, including requiring masks for passengers and employees, leaving some seats empty, conducting temperature screenings and even, in some cases, drawing blood to test for the coronavirus.

In the United States, airlines are seeing a tepid recovery. In mid-April, the number of people screened at federal airport checkpoints was down as much as 96 percent, compared with last year. On Tuesday, it was down 88 percent.

To offset that devastating loss in revenue, many airlines, Delta and United among them, began using otherwise idled passenger planes for all-cargo flights, many of which transported crucial medical supplies from China to the United States and other countries. Those flights were unaffected by China’s March ruling and Wednesday’s Transportation Department order.